This week a TF2 update started crashing SourceMod servers. It seemed to happen with random combinations of third party plugins, and would only happen after 20-30 seconds. Naturally, everyone pointed their fingers at us. After all, it only crashes when running SourceMod, right?

The call trace was incomprehensible:

The first task was deducing the correct trace. I started off by inspecting the stack; that is, the memory at the ESP register:

Where was 0x0BBD464B located? Looking at the modules list: 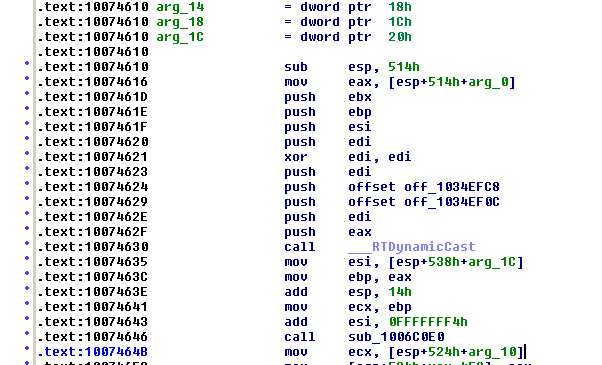 The address on the stack is the return address pushed from the call instruction on the second to last line. The goal was to find what preceded this function in the callstack, so I analyzed this function’s stack usage:

It looked like there was another engine function on the stack (0x0BBD4C40), but more interesting were its parameters. I inspected 0x0012AFF4 and got lucky: 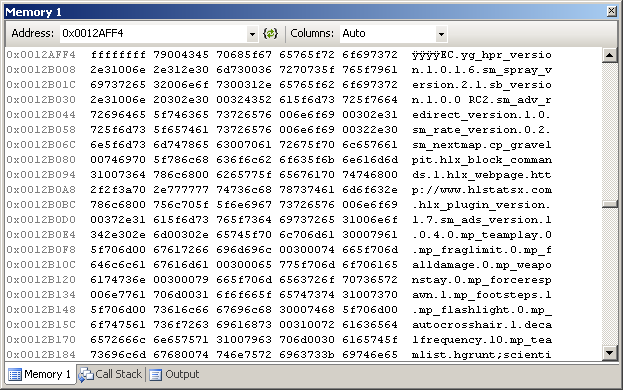 What’s this? It’s an A2S_RULES reply! Now I had enough data to make a guess: the server was crashing trying to reply to a rules query. I started a Team Fortress server on a weird port so that incoming queries would be blocked by my router. After about two minutes, there were no crashes. I started HLSW and queried my server. It crashed instantly.

I sent a quick e-mail to Alfred Reynolds who confirmed the bug and said it would be fixed shortly. I’m glad the bug wasn’t on our side, but I wish Valve would release PDBs of their binaries.

(Note: I’ve posted this off-schedule so the next article will be on December 3rd. Enjoy your Thanksgiving!)

Last week I described a nasty situation. My program to query all Half-Life 2 servers used 50 threads and 500MB of RAM. Today I’m going to discuss the solution I used toward making it more efficient.

First, I observed sslice‘s solution. He had a Python script which spawned two threads: one sent packets, and the other received. His Python script with far less overhead also completed in five minutes. I was doing something wrong.

However, I couldn’t just use his solution outright. He was only querying A2S_INFO which sends one reply, so there was a cheap shortcut: thread 1 pumped a single socket socket full of packets, and thread 2 polled the same socket for replies. We needed to add multiple successive queries into the fray, which means storing state information about each IP:Port being handled.

That was the first part of the solution. I took the netcode and moved it into an object, CQueryState, whose member variables were essentially the stack variables for the thread function. Then I converted the code to be state-based. “Flattening” such code was a tedious process.

The solution I chose was to simulate threading. As each state machine was non-blocking, it was feasible to process a huge number of them at a time, sleep for a short period of time, then process again. The new algorithm became:

I defaulted to 150 state objects. With 1ms of delay in between frames (a frame being a processing of all state objects), querying 35,000 servers resulted in the following results:

The solution of converting each thread to a “mini-thread,” and simulating each mini-thread every few microseconds, was an astounding success. I don’t think I’ve ever experienced such improvements in a programming project before; nor will I likely again, since in retrospect, the original design was extremely flawed. I’ve chalked this incident up to “learning by experience.”

Other notes: In the current program, I used one socket per state object. It’s probably feasible to rework this to use one socket, but it’d be a lot more work and memory to map the incoming packets back to viable state objects. The other interesting suggestion on IRC was by OneEyed, who suggested creating N sockets, then select()ing on them to see which ones have changed (and thus will have a viable state transition). It sounds feasible, but I have not tried it yet (nor can I see any huge benefits).

For little more than a year we’ve had a little tool (mostly used by us) which tracks stats. The database structure was rather flimsy, so one day I decided to rewrite it. The database overhaul made huge progress to future expandability, but the weight of old, sloppy code begin to overtake the efficiency of the operation.

Note: If the solution results seem obvious/trivial, you are ahead of me, as my level of netcode experience is only introductory.

The entire operation originally took place with the following steps:

For Half-Life 2, this process took just over six minutes in total: five minutes to query, and one minute to parse. However, we had a problem with deadlocks from the complexity of the threading model. When I attached GDB and dumped a core file, I was shocked to see the little C++ program using 500MB of memory!

My first intuition was that latter portion of the process was inefficient. Caching all query results in memory, then dumping them to a file, only to be squeezed through perl, was bad. The statistics could be computed on the fly, discarding and re-using memory efficiently. Then we could eliminate the obese text file and perl script entirely. Conclusion: moving statistics generation into the C++ program would be lightning fast, in-memory, and require no text parsing.

However, after a few quick tests, I found this wasn’t the cause of the memory overusage — it was the thread count alone. Each call to pthread_create added about 12MB of overhead. That might seem small for one or two threads, but with 50, it equaled a massive amount of memory. Unfortunately, using less threads meant the query operation took much more time. Below is a graph depicting this (click to enlarge):

After discussing the matter in IRC, sslice and devicenull helped me to see that there were essentially two bottlenecks working together. While it was efficient to try and do fifty things at once, it wasn’t efficient to wait for a timeout. The call to select() meant that each thread would simply idle, ruining overall efficiency. The second bottleneck is that only so many UDP packets can be sent at a time before things start getting mucky. I hadn’t even approached that. Because each thread spent most of its time blocking, the properties of UDP weren’t being fully utilized.

For comparison, sslice had a Python script with only two threads (one for sending packets, one for receiving) that was able to accomplish almost the same task in the same time. However, his model was based on one socket for many connections, something that does not scale well to querying server rules (I’ll explain this further next week).

Next week: the solution, using non-blocking sockets and state machines.