A few days we released SourceMod 1.3 and suddenly got a few reports of crashing when clients disconnect. We couldn’t reproduce it, but a few users claimed they could. We had about ten minidumps to work with (they include a few KB of stack memory and that’s it).

All of the stack traces had a weird code address at the top and nothing else. Here’s two examples:

These code addresses are weird because the debugger couldn’t map them to any loaded module. So they’re either dynamically generated/exploited, or garbage. What can we do with such little information? Surprisingly, a lot!

The first thing of interest was that ESP, the stack pointer, was not aligned correctly (it should be divisible by 4). This wasn’t the case in all minidumps, but it was a good hint, given that it was in the usual range for Windows main-thread stack addresses. The CPU was probably jumping to garbage memory, and decoded it to something that incremented ESP. So after stripping that extra theoretical increment off ESP, I could inspect its memory in Visual Studio:

Whoa! A string on the stack suggests there was indeed something going on with client disconnects. Also, the value on the top of the stack – 0x0E531992 is very close to 0x0E531990. This was enough to form a wild guess: maybe the stack was misaligned, and the CPU picked the wrong return address to jump to. We can do better though.

The two most interesting binaries in the HL2 process are the engine and server. Let’s look at their address ranges in Visual Studio:

Let’s take the outermost one first, since it may correspond to the stack frame that created that cool looking string. To go further, I like to use IDA – it’s a great disassembler and it has non-commercial and trial versions. With engine.dll loaded in IDA, all the addresses are wrong – luckily IDA can rebase the disassembly (Edit -> Segments -> Rebase Program): 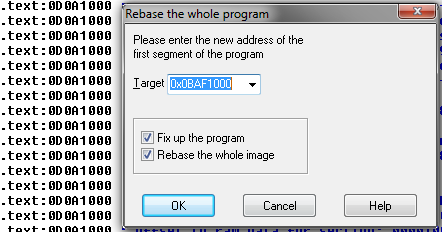 Well, that’s kind of troublesome. IDA can’t tell where an indirect call will go. So I scroll around the function and look for hints, and get lucky. This is right above:

Again, this has something to do with player disconnects! Now I really want to know what function this is. Unfortunately Windows DLLS have symbols separated, but Linux binaries have them built-in. So I load the Linux version of the HL2 engine in IDA, and go to Jump -> Jump to Name, and type in aPlayer_disconn. By doing this I’m hoping the Linux binary has the same string, since IDA encodes string constants as unique names.

Here’s where IDA is extremely helpful – I click on aPlayer_disconn, and go to Jump -> Jump to cross reference:

And now I get this:

So now our mystery call stack has CGameClient::Disconnect() in it. Progress! Now I want to know what that virtual call usually goes to. First I find the same call in the Linux binary. The Windows one had this:

The Linux one is much harder to read because of GCC’s (asinine) PIC code, which IDA has trouble figuring out. But the basic pattern I’m trying to mentally match is:

In the Linux version, this looks really close:

Unfortunately IDA had trouble decoding the string reference – aS_3 points to “, %s” – but note it adds two bytes, making “%s”. Now I start a Linux server in GDB, and compute the address I want to break on. This is easy by taking the IDA difference and adding it to the function in the process:

Now I add and kick a bot (bold red text is my input):

Yay, it hit! Now I step into the assembly to see where this goes:

Now back in IDA, I go to Jump -> Jump to function and search for RemoveClientFromGame. Of interest in this function is the following code:

Since we have the symbol info, here I don’t have to do extensive guess work – this is almost definitely an IServerGameEnts pointer, a singleton interface the engine uses to feed information back to the actual game. Here it’s calling the offset for IServerGameEnts::FreeContainingEntity. Could this be the other address we saw on the stack, 0DFD4CDA? It seems likely, given that there is one pushed value in between, and the disassembly has one push as well. Let’s compare the target functions in source and binary. From loading server.dll in IDA:

The same function from hl2sdk/game/server/gameinterface.cpp:

These seem really similar. So it seems like we might be crashing in ::FreeContainingEntity(), at a point where the stack depth is around 4 values. But looking at this function, it’s not really clear what could be happening:

In HL2 parlance, UTIL_RemoveImmediate() means “immediately destroy and deallocate this entity”. The point at which the stack depth becomes 4 is around this call – but not exactly. At this point I gave up for the night and asked the user if he had any more information. But from this, I had the following guesses:

Amazingly, he posted a working test case that involved adding and kicking a bot on a specific game. I tried this game, and managed to reproduce it! I narrowed the problem down to a minimal set of “extra junk running”, and from there SM developer Fyren noticed the problem pretty quickly.

SourceMod overwrites virtual table slots to “detour” function calls in between the engine and whatever game is running (in this case, Day of Defeat:Source). The slot number can differ between games, so it is specified in a configuration file. One of these configuration entries was missing, and SourceMod was accidentally overwriting the zeroth vtable entiry – the destructor! Now the sequence of events is clear:

Given that the patch that added this code baked for months, it’s amazing it slipped into a release. And for the record, it had two peer reviews. But there you have it. Sometimes it’s possible to draw blood from a minidump stone – but without a test case it’s unlikely we could have gotten this as quickly.